Deploying a PostgreSQL Pod on OpenShiftv3 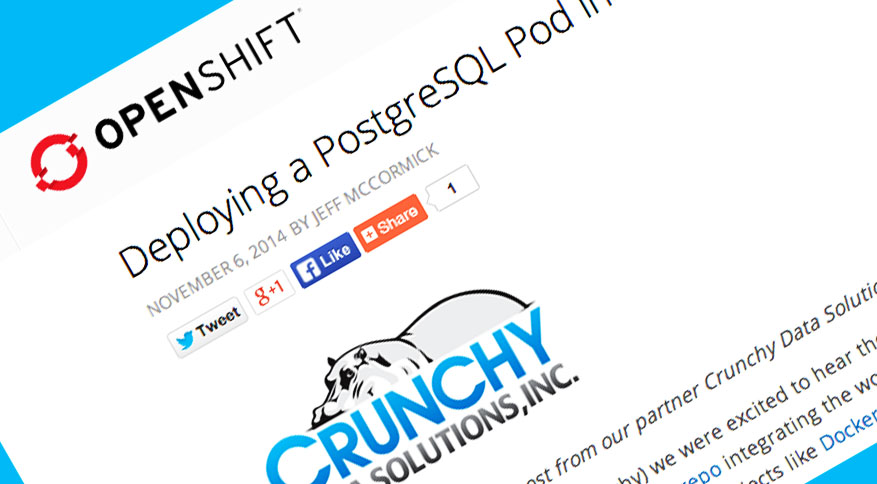 Crunchy Data Architect Jeff McCormick's guest post on the Red Hat OpenShit Blog demonstrates how to deploy a PostgreSQL Pod, running as a Docker container, in OpenShift v3 and end up with a deployed solution.

At Crunchy Data Solutions (Crunchy) we were excited to hear the recent announcement from the OpenShift team regarding the new public Origin repo integrating the work Red Hat has been doing for over twelve months in OpenShift Origin and related projects like Docker, Kubernetes, GearD and Project Atomic.

Crunchy has been working with the OpenShift team for some time and witnessed the value proposition of combining PostgreSQL, a leading open source object relational database, and OpenShift first hand by working with enterprise users as they deployed PostgreSQL on OpenShift v2.

As we began our deep dive into the new OpenShift Origin repo and Kubernetes orchestration, we wanted to pass along our initial learning on how to provision a simple PostgreSQL database on an OpenShift Pod in Kubernetes.

Specifically, in this blog post, we will provide an example of how to deploy a PostgreSQL Pod, running as a Docker container, in OpenShift v3 and end up with a deployed solution.

Continued at the OpenShift blog: