Multi-PgBouncer is our affectionate in-house name for a special use case of running multiple instances of PgBouncer. PgBouncer is the venerable go-to tool for managing connection pooling at the database layer for Postgres. For some of our customers with notably large databases and high throughput, running multi-PgBouncer has been a great way to keep up with load and connections.

David Christensen recently did a talk at PGConf.NYC entitled “How to Tame a Mastodon: Lessons for PostgreSQL at Scale”. Multi-bouncer was included as part of that talk and this topic got quite a bit of attention in the Q&A section.

If you’re just getting familiar with connection pooling, check out Craig’s excellent overview on “Your Guide to Connection Management in Postgres” or Karen Jex’s video “Is there anything PgBouncer can’t do”.

In general, the benefits of using connection pooling are:

A few notes about using pgBouncer at scale:

Signs that you need more than one PgBouncer

Standard PgBouncer is packaged with Crunchy products and in general is sufficient for most use cases, including very large databases. However, when you run into some of the limits of a single PgBouncer instance, support for multi-PgBouncer can be a lifesaver.

You can tell that a single PgBouncer instance is having trouble keeping up when:

When this happens, this is likely related to PgBouncer not being able to keep up with:

When we have seen this situation on Crunchy Bridge, profiling revealed that PgBouncer was spending the majority of its time copying data in/out of the SSL buffers from the upstream connections in preparation for sending back to the application connections.

If you want to do a quick check on how many connections you’ve got going:

So here, if I’ve got max_connections=500, you’re pretty close to using all of the available transactions, none are idle, this is a busy database, I might want multi-pgBouncer.

Multi-PgBouncer works by running multiple PgBouncer instances via templated systemd service file, each listening on the same port, so incoming application traffic will spread between the running PgBouncer instances. Peter Eisentraut has an excellent writeup on how to set it up.

Multi-PgBouncer uses the linux SO_REUSEPORT … which based on the name is pretty straight forward, it lets you reuse a port for multiple services. This is also a kind of simple load balancing, since sharing this port is part of the service. This feature was added to pgBouncer in version 1.12, released in 2019. 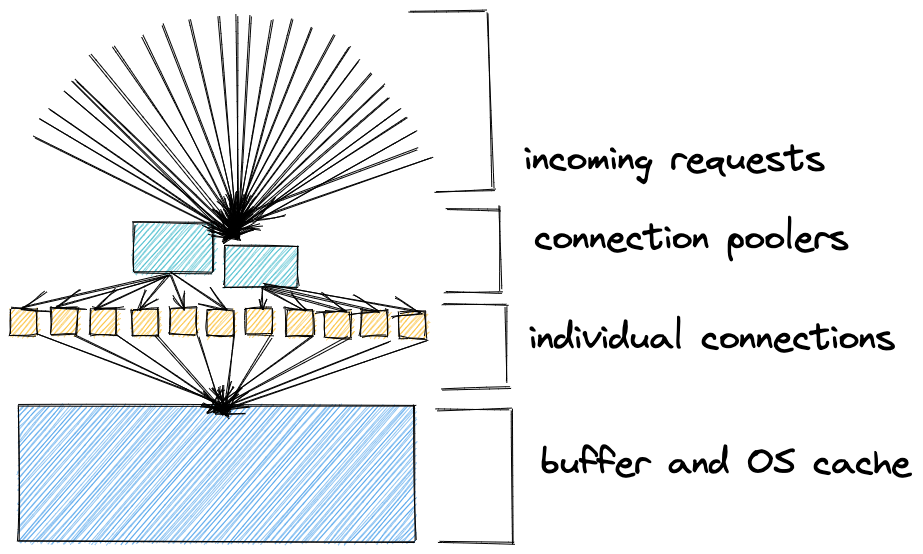 This is part of our standard support option for Crunchy Bridge. Though not self-service it can be enabled by our support team. This service can also part of Crunchy Postgres for Kubernetes installations.

As far as downsides to multi-PgBouncer we haven’t run across any big ones but some things to consider:

If you’re thinking that multi-PgBouncer might be a solution for you, contact us, we’d love to chat.