This is the first in a series of posts intended to introduce PostgreSQL users to PL/R, a loadable procedural language that enables a user to write user-defined SQL functions in the R programming language. When further combined with PostGIS, the geospatial extender for PostgreSQL, users can perform powerful spatial analytics within the PostgreSQL database. This initial post introduces PL/R and R, provides set up instructions for following the Spatial Analytics example to be used in this series of posts, and provides introductory instruction on Geocoding with PostGIS, R and PL/R.

While PostgreSQL is known for and widely popular as a transactional database due to its SQL compliance, reliability, data integrity and ease of use, it is less commonly associated with analytic applications.

The combination of PostgreSQL and R provide users with the ability to leverage the power and efficiency of PostgreSQL and the rich analytic functionality of R. When further combined with PostGIS, the geospatial extender for PostgreSQL, users can perform powerful spatial analytics within the PostgreSQL database.

This series of blog posts will provide users with information about:

It is our hope that these posts will cause those building analytic applications to give PostgreSQL a second look.

Introduction to R and PL/R

The R Project for Statistical Computing provides the R programming language, a language and environment for statistical computing and graphics. R is an integrated suite of software facilities for data manipulation, calculation and graphical display. R and its libraries implement a wide variety of statistical and graphical techniques, including linear and nonlinear modeling, classical statistical tests, time-series analysis, classification, clustering, and others. R is easily extensible through functions and extensions, and the R community is noted for its active contributions in terms of packages. In particular, R includes:

R is available as Free Software under the terms of the Free Software Foundation’s GNU General Public License in source code form.

PL/R is a loadable procedural language that enables a user to write user-defined SQL functions in the R programming language. PL/R offers most (if not all) of the capabilities a function writer has in the R language. Commands are available to access the database via the PostgreSQL Server Programming Interface (SPI) and to raise messages via elog() .

As a demonstration of the value of using PL/R to conduct Spatial Analytics, this series of blog posts will use the combination of PostgreSQL, PostGIS, R, and PL/R to conduct analysis on publicly available geospatial data, including: (i) ingest and utilize spatial shape (vector) data, (ii) use online services for geocoding, and (iii) ingest, utilize, and analyze spatial “raster” data.

As an example of the types of analysis made possible, this blog post will perform analytic operations against Normalized Difference Vegetation Index (NDVI) data set in order to determine:

While this example is admittedly arbitrary, it is not difficult to apply the analytic techniques and methods demonstrated through this example to a variety of Spatial Analytic requirements.

The data used in this series of blog posts is NDVI data from the moderate-resolution imaging spectroradiometer (MODIS) data made available by the United States Geologic Survey (USGS). Specifically, this blog post makes use of MOD13A1 global, spatial raster data provided every few days at 500-meter spatial resolution (250 m and 1 km resolution is also available).

Vegetation indices are derived from typical spectral reflectance signatures of leaves. Reflected energy in visible spectrum is very low while Near-infrared radiation (NIR) is scattered with very little absorption. As a result, the contrast between visible and NIR is a sensitive measure of vegetation density. NDVI calculates the normalized transform of NIR to Red reflectance ratio as follows:

Analysis of vegetation conditions has applications that may include:

This paper uses data for San Diego Country as described in more detail below. For those interested, the SQL functions have the state/county of interest passed in as an argument to make it reasonably easy to repeat for a different county somewhere else.

Next, it is necessary to install variety of required/interesting R packages as follows:

When installing the R packages, it is necessary to ensure that these packages are being installed as root or postgres.

It is worth noting that, while there is no way to access internals of the database backend with PL/R, the user is able to gain Operating System-level access under the permissions of the PostgreSQL user ID, as with a C function. Thus, unprivileged database users should not be permitted to use this language to create new functions. It must be installed as an untrusted procedural language so that only database superusers can create functions with it. The writer of a PL/R function must take care that the function cannot be used to do anything unwanted, since it will be able to do anything that could be done by a user logged in as the database administrator. The resulting functions may then be safely executed by unprivileged users.

Once our PostgreSQL, PostGIS, R, and PL/R environment are deployed, the next step is to ingest the Administrative Boundaries data associated with our example. For this example, we will be using the GADM database of global administrative boundaries found here.

As a starting point for the example used for this blog series, it is necessary to create the USA Counties Layer Table. This step can be completed by first using the getData() function from the rgdal package in order to create the spatial shape layer for administrative areas of the country and level of detail requested. Once the spatial shape layer is created, it is possible to use the writeOGR() function to create a new PostGIS table and store the gathered shape data in the newly created PostGIS table. Once the data is inserted into the newly created PostGIS table, it is possible to create a secondary index on the columns corresponding to the first and second level shape names.

The following commands implement steps described above through the creation of a PL/R function as follows:

Note that this function could easily be used to create spatial layer tables for other countries at the same, or different, levels of detail.

Next, create a PL/R function to extract and plot a specific administrative shape of interest using the following commands:

It is then possible to obtain a png image of the San Diego County boundaries using the following command:

The resulting visualized output of the San Diego County plot is provided in Figure 1 below. 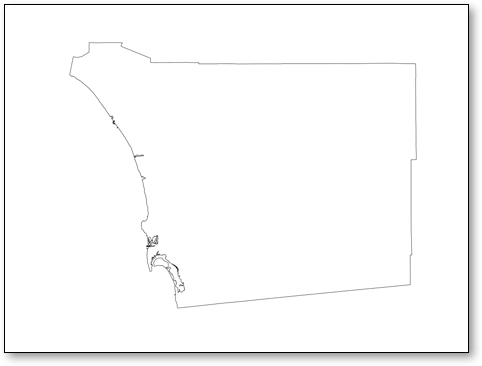 For purposes of our example, we will use the R package ggmap to convert addresses to coordinates. The process for this conversion is as follows:

The PL/R function that implements the steps described above is as follows:

The PL/R function is then used to create a spatial layer containing coordinates of three airports located within San Diego county:

This is the first in a series of posts intended to introduce PostgreSQL users to PL/R, a loadable procedural language that enables a user to write user-defined SQL functions in the R programming language. In particular this post was designed to introduce R and PL/R to PostgreSQL users who may not be familiar with those capabilities.

Coming posts will build on the example introduced in this post in order to demonstration how the combination of PostgreSQL, PostGIS, R and PL/R can be used to conduct spatial analytics, including NDVI Processing and the use of sample Analytics Functions.