Routing with PostgreSQL and Crunchy Spatial

One of the least-appreciated PostgreSQL extensions is the powerful PgRouting extension, which allows routing on dynamically generated graphs. Because it's often used for geographic routing (and is a part of Crunchy Spatial), PgRouting depends on the PostGIS extension, but there's no reason it could not be used for graph analysis for any number of other graph problems.

Here's a simple and practical example of backing a web map with PgRouting.

Thanks to the magic of packaging, PgRouting is available in most PostgreSQL package repositories:

PgRouting can calculate routes on any graph data, that is, any data that can be expressed as a collection of edges with from- and to- node values, like this:

For this example, we'll use data from Boston collected by the OpenStreetMap project.

Data for other regions of the world are available at the GeoFabrik download site. Start with a small extract while you are learning.

The PgRouting package ships with a utility program for loading OpenStreetMap OSM files, so loading the Boston data is a one-line command: 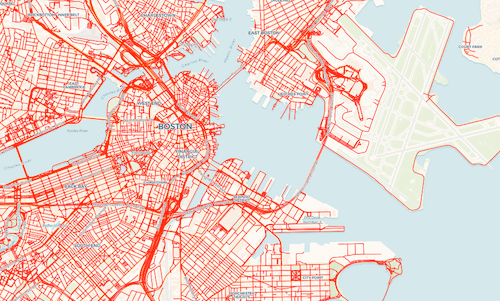 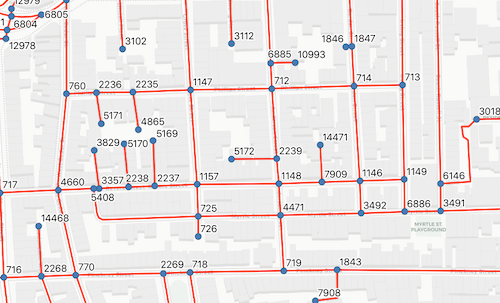 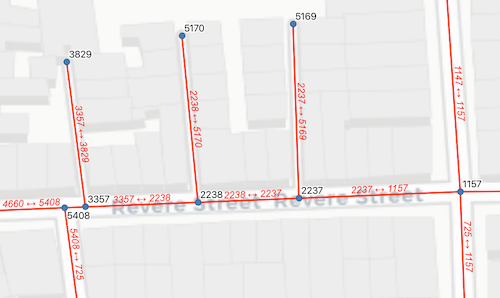 Note that the ways table includes a source and target node identifier for each edge, so it's possible to traverse from node to node over the graph of edges. In the simplest form, PgRouting can walk any collection of records with a edge id column and source and target columns.

In addition, PgRouting can make use of cost and reverse_cost columns to hone the routes. As we'll see, the routing engine can read the graph structure and costs from a static table, but can also generate them on the fly, so routes that take real-time conditions into account are easy to build.

We have all the pieces of a routing engine in place now in PostgreSQL:

But in order to serve up a routing web application we need to bridge from the web site into the database server side. 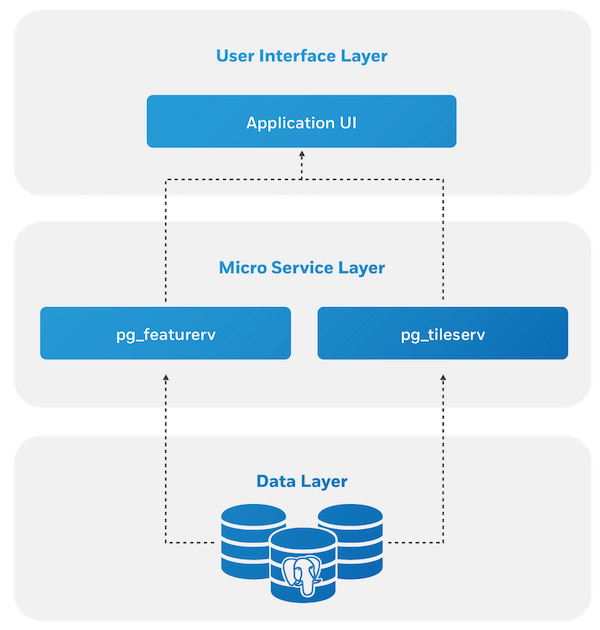 pg_tileserv and pg_featureserv, both open source components of Crunchy Spatial, will be our bridge from the web client to the database. The tile service will allow us to visualize the ways table on the map, and the feature service will let us bind an HTTP end point to a user-defined function in PostgreSQL to run the routing query.

For our web map, we will use OpenLayers, an open source web mapping toolkit. With OpenLayers we can bind map click events to calls to our backend to generate point-to-point routes on the fly.

The PgRouting extension generates routes from graph-node-to-graph-node, and we will be feeding the system with mouse clicks, that won't necessarily be on a node. So one function we need converts clicks to node numbers.

The PostGIS nearest-neighbor operator (<->) is used here to quickly find the nearest node point, and we restrict ourselves to only nodes that appear as sources or targets on edges.

PgRouting offers multiple core functions, but for this example, we'll use the classic pgr_dijkstra() for Dijkstra's algorithm. Here's what our core routing query looks like:

The routing call assembles the edges of interest on the fly. This means that any routing query will always reflect the current state of your database. Dynamic costs, real-time optimization, different edge graphs for different users; the flexibility of the system is very high.

Because we are pulling edges with the length as the cost, and the reverse cost is the same as the forward cost, our routes will ignore one-way restrictions, and will not prefer arterials over secondary streets.

Our full routing function not only runs the routing query, it also joins the results back to the edges table to return the calculated route as geometry for the map to consume.

While pulling the graph dynamically using SQL might seem like a performance drag, for this data set note that routes are generated in about 50ms. PgRouting also includes facilities for optimizing routes on larger graphs, like contraction hierarchies.

Putting it All Together

The full user interface for the routing example is available in GitHub.

The key function of the interface just takes in the map clicks and mashes them into a URL that calls our pg_featureserv function endpoint, defined above:

Since pg_featureserv publishes any table-returning function it finds in the postgisftw schema, we don't have to do anything other than turn on pg_featureserv and point it at our routing database to have the web serving online and ready for routing.

The full directions for this example, and the example web page are all available in GitHub.