If constraints in general have caught your interest, our interactive learning portal has a whole section on the use of non-spatial constraints, even a video walkthrough!

In our last installment, we covered the use of CHECK constraints to enforce data quality at an object level.

Parcels are form of "cadastre", a spatial layer that reflects the legal subdivision of land. One of the core business rules of parcels is that no piece of land may be in two parcels at once.

There are two ways for parcels to break the rule. 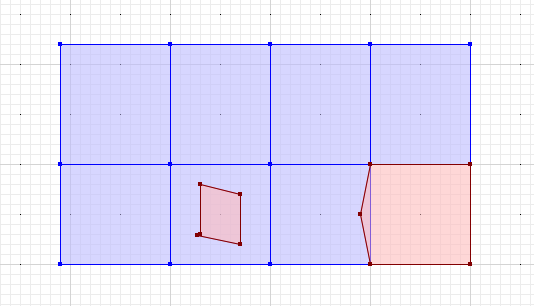 We need to check that new and updated parcels don't break those rules.

The query inside this trigger looks for parcels that share area. If there are more than zero parcels sharing area, we have a problem, so we raise an exception to abort the transaction.

Note the three WHERE clauses:

We cannot use a simple call to ST_Overlaps to test for sharing of area, because "overlaps" only tests for the case where polygons are overlapping but not contained (the polygon on the left).

The DE9IM exactly describes the relationship between two geometries.

Every geometry has three components:

The DE9IM code for two geometries is derived by filling in the matrix indicating how the components interact. For example, for the case of two overlapping polygons: 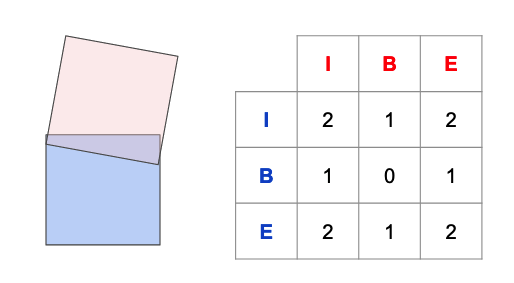 The final matrix is turned into a relate string by appending the rows, so the SQL to generate a DE9IM returns a single string value:

The matrix for the case of the covered polygon looks like this. Note that in cases where the components have no intersection, the cell is filled with an "F". 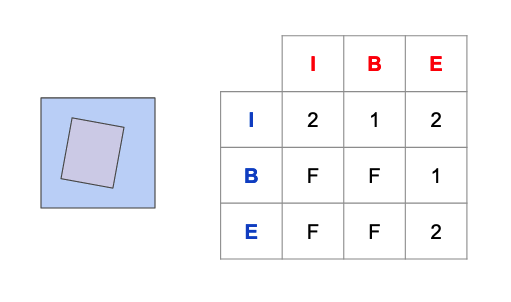 The two matrixes are both quite different, but they have a key thing in common: the intersection of the interiors is an area in both cases. So any relate matrix for two polygons that has a "2" in the I/I cell indicates that the polygons have some area overlapping, and they are thus, not legal parcels.

Fortunately there's a form of ST_Relate that tests relate patterns, so we don't need to do string hacking.

The three-parameter form of ST_Relate tests the relate matrix for the two geometry parameters against the string parameter, and returns true if the pattern is consistent, where the glob "*" matches any cell value. So the pattern "2********" matches any relate where the I/I cell is "2".

To enable parcel overlap checking on our parcels table, we need to associate the trigger function with an actual trigger.

Parcel overlaps are a good test case for a simple trigger constraint, but there are structures that require even more finesse to quality control for: connected networks.

In our next installment, we'll look at using constraints and deferral to enforce connectivity and other data quality for a road network.