One of the less visible improvements coming in PostGIS 3.2 (via the GEOS 3.10 release) is a new algorithm for repairing invalid polygons and multipolygons.

Algorithms like polygon intersection, union and difference rely on guarantees that the structure of inputs follows certain rules. We call geometries that follow those rules "valid" and those that do not "invalid". 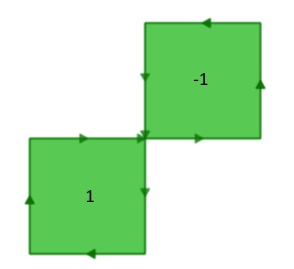 This invalid "figure 8" polygon will return an ST_Area() of 0.0, because the area of one lobe cancels out the area of the other.

PostGIS has had an ST_MakeValid() function since version 2.0, but with 3.2 it will be adding a new repair algorithm. The new algorithm tries to use the structure of the lines to generate a "best guess" repair. It also works at a lower structural level, so it has higher performance than the old algorithm.

An additional parameter has been added to ST_MakeValid(), so you can choose the algorithm you want.

For simple cases, both algorithms return the same result. In this case the figure-eight polygon is repaired by converting it into a multipolygon with a square component for each lobe.

In truth there is no "correct" answer for many repairs, only differences of opinion.

Here the different approaches show a difference. The old algorithm preserves the zero-width edge where the hole and shell overlap, the new one subtracts the hole from the shell.

Here, the old algorithm preserves every edge in an overlapping multi-polygon case, resulting in a checkerboard, while the new algorithm reasons that the correct representation of the two overlapping polygons is the union of their areas.

The new algorithm was tested against 75 different kinds of invalid inputs, and we have published a page where you can see the cases and how the two algorithms repaired them.

Using the 75 invalid inputs, and comparing the two algorithms repairing those inputs, we found that the new algorithm is 2.7 times faster than the old algorithm. Most people do not have a lot of invalid geometry to repair, but for those that do, the new implementation is a huge improvement.

PostGIS 3.2 (via GEOS 3.10) will also include an improved ST_IsValid that is about 30%-100% faster than the previous version, depending on the inputs.

If you are accepting new geometry from third parties and want to ensure your calculations remain robust, it might make sense to validate them on insert and update, and then preemptively repair them before storing them by adding a trigger to your table.